Google+ become one of the most popular social platform currently having 190 million people are now active in the Google+ stream, and 390 million are active across Google. Google now announced major new updates for Google+ like redesigned Stream, Hangouts, Auto hastag and more. 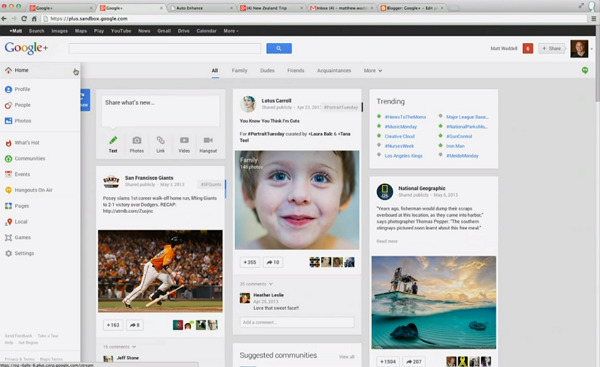 Google+ Redesigned: Google announced completely redesigned look for Google+ stream, Hangout and photos. The new look developed with multi column layout, you can see one, two, or three columns of content depending on your screen size and orientation.

Most interesting is when you post a photo of Taj Mahal on Google+, you don't have to say "Taj Mahal" in your post anymore. Google will scan the image and show you related content automatically.

Hangouts: Google unveils new Hangout app for Android and iOS that allows users to share text, photos and live videos across various platforms such as Android, iOS and Desktop. The app is fast, free, and includes a number of key features like Turn off history, real time activity indicators and more.

Click here to check out more about these new features