Indian electronic company Videocon has launched its first Android tablet the VT10 in India for the sum of Rs 11,200. VT10 comes with 10.1 capacitive multi touch IPS display with a resolution of 1280x800 pixels. It runs on Android 4.1 Jelly Bean operating system powered by 1.5 GHz dual core Qualcomm Snapdragon  processor along with 1GB of RAM. 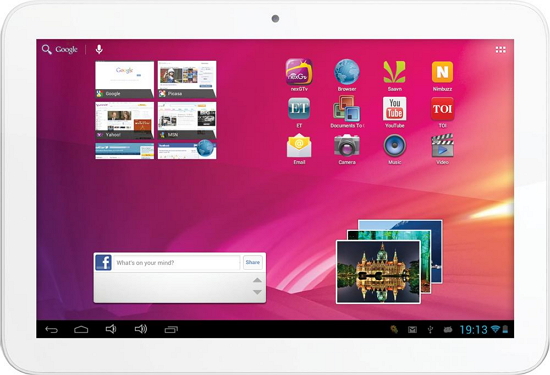 VT10 having 2  MP of camera on both side of the tablet. It comes with 8GB of inbuilt memory which you can expand up to 32 GB using Micro SD. VT10 equipped with Li-Polymer 6800mAh gives 4 hours of browsing time. It supports 3G, WiFi and HDMI ports.

Videocon did not announced yet officially about this new arrival, but VT10 already available on Indian online stores Homeshop18 and snapdeal .