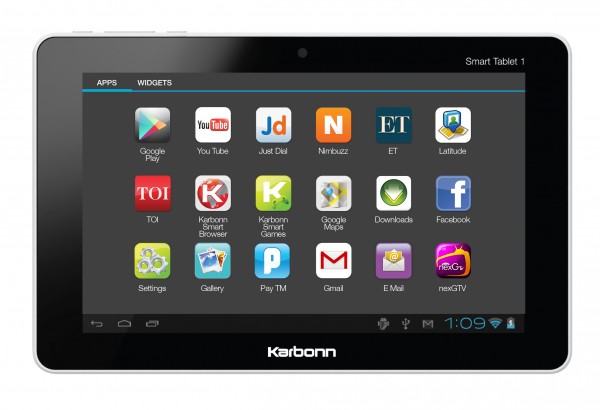 Karbonn Mobiles also launched new Android smart phones A9, A7 and A5 with latest features. below the complete press release from company


- Announces ‘Karbonn Smart’; Incubator for a new breed of premium phones in India

- Announces the launch of Smart Tab 1 and advanced feature rich smartphones like Karbonn A9, Karbonn A7 and Karbonn A5


New Delhi: July 5, 2012: Karbonn Mobiles, which has redefined telecom mobility across the world with its range of affordable and technologically rich mobile products, has announced its refreshingly new gamut of operations under the brand extension of ‘Karbonn Smart’. In the announcement, the New Delhi based conglomerate has also stated the launch of its revolutionary product range encompassing the ‘Karbonn Smart Tab 1’ and ‘Karbonn A9’ Smartphone along with a range of affordable and technologically advanced networked devices, which will help strengthen its position as a global leader of affordable mobile solutions.


Entailing to create a distinctive niche’ for the smartphone and tablets segmentation in the highly engaged Indian mobile market, Karbonn Mobiles has introduced its nuevo brand extension christened ‘Karbonn Smart’ under whose umbrella the new range of technologically advanced products from the stable will be marketed. Intended to become a one-stop-shop for all the technologically advanced needs of the highly enlightened Indian mobile consumer, the ‘Karbonn Smart’ eco-system will make them privy to all the technical and mechanized developments in the Indian mobile ecology.


It is in continuation of this technological marvel that Karbonn Mobiles introduces the Karbonn Smart Tab 1 which is definite to bring about a technological revolution in the already dynamic Indian Tab market. Loaded with the revolutionary Android 4.0.3 (Ice Cream Sandwich) software running on the 1.2 GHz X-Burst processor, the Smart Tab 1 features an 17.8 cm capacitive 5-point touch screen powered by a 3,700 mAh battery. Featuring 3D gravity sensor, Wi-Fi and 3G support through USB dongle, Karbonn Smart Tab 1 comes with a 2MP front camera along with pre-embedded applications like Karbonn Smart Browser and Karbonn Smart games, TOI & ET app, Facebook and much more.


Servicing the needs of the ever prospering smartphone market, Karbonn Mobiles has also introduced its latest range of smartphones which includes the Karbonn A9, the Karbonn A7 and the Karbonn A5; making it one of the most technologically advanced mobile phone ranges to look out for. Combining features like an ultra fast processor, high quality camera, pre-embedded social, entertainment and utility apps; along with Dual SIM support and latest android 2.3.6 Gingerbread version, the range promises to cater the needs of the progressively advanced mobile consumers of today.


On the new brand extension of Karbonn Mobiles, Shashin Devsare, Executive Director, said, “After creating an unprecedented buzz in the national and international market by bringing in technologically advanced and feature rich product range for the masses, we at Karbonn Mobiles intend to engage the audience with our latest offering of the ‘Karbonn Smart’ ecosystem. Through this ecosystem, we wish to bring to our informed and enlightened consumers, technologically advanced networked devices encapsulating an avant-garde tablet and smartphone range which bring to the consumers products which are amongst the best in the world in terms of battery backup, internet surfing, audio-video playback and engaged user interface.”


“Through the new product range our aim is to usher in a new revolution in the technologically advanced mobile market and thus create a new wavelength wherein Karbonn Mobiles can demonstrate its technical stewardship across the world”, he added.


Pradeep Jain, Managing Director, Karbonn Mobiles, says on the way forward, “Karbonn Mobiles aims to massify technology and is envisioned as a brand which is here to stay. We wish to solidify our positioning as a major player in the technologically advanced networked devices market, and intend to make engaged mobility solutions a reality for the consumers around the world. Through our endeavors we also wish to bring pioneering technologies to the consumers in the country, wherein we intend to make an effort for creating an engaged value system for greater masses, thus bringing them greater technology.”


About Karbonn Mobiles: Karbonn Mobiles, launched in March 2009, is the one of the fastest growing mobile brand in the country complemented by a comprehensive portfolio of mobile phones with an array of features. Karbonn Mobiles is a joint venture between Delhi-based Jaina Group and Bangalore based UTL Group. Karbonn already has over 650 service centers established across the country, ensuring great after sales support.