The world of Tennis turns its eye to London Wimbledon 2012 tournament starts today. The 3rd Grand Slam of the year gets underway with focus on the usual suspects. 28 of the last 29 Grand Slam titles have been shared between Novak Djokovic, Rafael Nadal and Roger Federer. So, expect one of them to rule at what's called the Holy Grail of Tennis yet again. For the Wimbledon 2012, the prize money purse was increased to £16,060,000 from £14,600,000 in 2011. Google offers schedule in group wise like Men's Singles - Women's Doubles. So if you want to know the schedule of women's doubles matches click that particular link above marked in rectangle. If you want full list click on the show more matches link like above image. 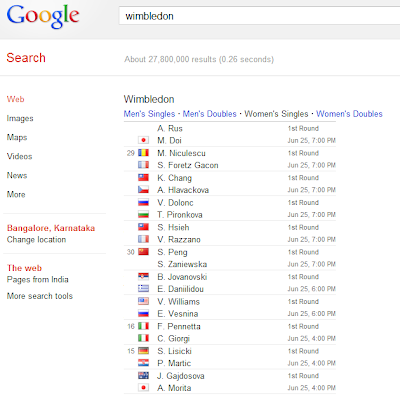 So we don't go to any where on the web to know the schedule, just open Google type Wimbledon get daily match schedules.