The 2012 Wimbledon Championships will take place at England from 25 June to 8 July 2012. It will be the 126th edition of the championships, and the third Grand Slam tournament of the year. The Official Wimbledon App released for iPhone and Android devices. 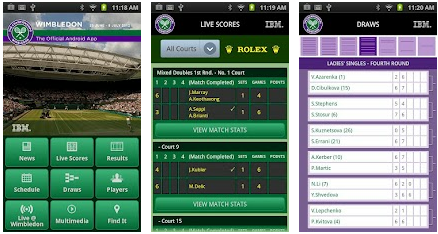 It is very important app for all tennis fans who don't want to miss even a movement of Wimbledon 2012. This app will informed you everything about Wimbledon 2012 like Live scores, Results, Schedule of Play, Draws, News, Player profiles, On demand videos, Interviews, golden movement photos etc..