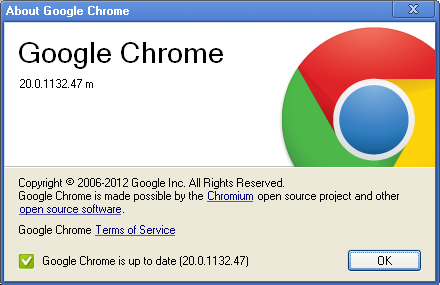 Google Chrome has tremendous growth with in short period after it launched in 2008. Now Chrome has nearly 310million active users around the world. It is double of the users amount which was 160million users at 2011. Now Google Chrome released a updated stable version 20.0 with some security bug fixes. This new stable version available for Windows, Mac, Linux and Chrome frames.

See the below video that tells how Google Chrome got the #1 position in the browser war.

This new chrome version automatically updated to your machine. other wise you may update manually.  Go to below links to download the chrome stable version.