Usually Indians are more addicted to Cinema and TV Shows.  If you are addicted to serials but you cannot watch regularly because of your timings. A good news to you now can watch TV Serials and Shows on Youtube. Youtube India partner with major Indian broadcasters such as Sony Entertainment Television, Colors, ImagineTV, Star India, and VikatanTV to gives 19,000 full episodes of 300 programs in six different languages (Hindi, Tamil, Telugu, Bengali, Gujarati, and Punjabi), 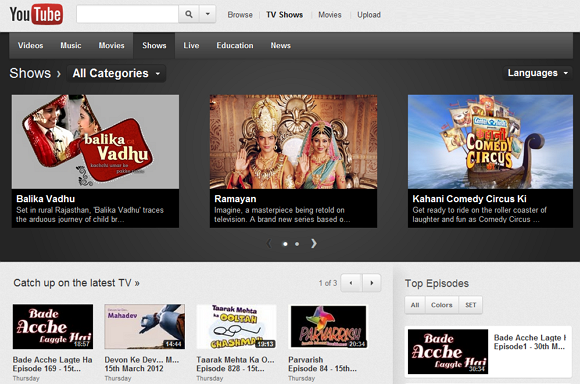 You’ll find programs into genres like drama and comedy, as well as the latest and top watched episodes featured on the page. Missed the last episode of Bade Acche Lagte Hai? It’ll be right there in the channel waiting for you. If you’re looking for a few good places to start, check out popular shows like Balika Vadhu, Ramayan, CID, Devon Ke Dev...Mahadev, Taarak Mehta Ka Ooltah Chashmah and Thendral.